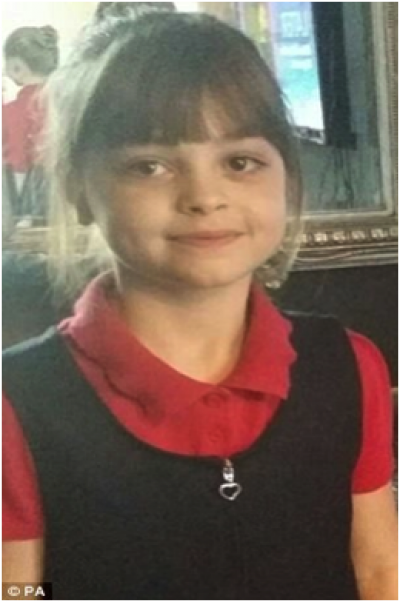 ‘No violence of any sort can be perpetrated in the name of God’(Pope Francis at Al-Azhar Mosque  and University in CAIRO, 28.5.2017)
A beautiful little girl of 8 became today the youngest victim of Manchester terror blast as her mother and sister recover from injuries in hospital. Saffie Rose Roussos is described as a ‘beautiful little girl’ by her school headteacher. She did not have to die for going to a singing concert! The basic rights of Rose have been baffled and with her ALL OUR RIGHTS for living in peace and security, wherever we are.
Can you imagine the agony parents are going through? Parents, like those of Saffie Rose, do everything to ensure their daughter/child grows safe, educated, secure and in good health. Parents whose only wish is the proper development and happiness of their child.
There is no point in listing all the previous terrorist attacks, those of Boston, of Paris, of Nice, of London and Madrid underground, in Iraq, in Syria, in Afghanistan, on the Coptic churches of Egypt.., nor of listing the genocides, from those against the Kurds, the Jews, the Tutsis. Most important is what can be done to ensure no more repetition of such attacks, described by Theresa May as cowardly and criminal. WHAT TO DO??
An immediate action being taken by the tough and generous people of Manchester itself is on helping pupils and staff, injured and escapees, friends and families cope with this shocking event. Prayer, prayer together, consolation, dialogue, medical action which started immediately to save all those injured. BUT what beyond?
The interreligious dialogue is extremely useful for uniting all those who believe in God and most certainly defeats the thinking of all those who extreme and radicalized COMPLETELY  MISUSE and misinterpret THE TEACHING OF THEIR RELIGION. For this era, it is also up to all Muslims, especially with the incoming time of fast and prayer which is Ramadan, to convince, who are so called radicalised to change; and if unable to convince them, to denounce them before deaths of innocents occur.
Face the stark reality: someone who goes ahead to make a bomb and seeks a place where there is a maximum of young people and even children and goes in to murder them is an outright criminal, nothing else, who is totally mistaken to attempt to link this abhorrent criminal act with Islam, or for that matter with any other religion.

Intercountry collaboration is crucial. Probably Europe has the best chance of success with the 3 M trio: May, Merkel, Macron, to which one may add the determination of an otherwise unstable Trump to address the Middle East assembly in Riyadh calling on all Muslims to help eradicate Isis. Plus the determination of Putin to do so. And possible and finally solve the Palestinian problem with a proper 2-state solution? Nothing is worse for encouraging terrorism than the desperation of people like that the Palestinian people, who suffer continued injustice for years.

Can the UN give the lead by REALLY getting all states to collaborate to fight terrorism of whatever shape, and severely isolate and punish countries who do not pull their weight? António Guterres the SG of UN stated:  ‘My heart is with people of Manchester & all victims of terrorism. We must stand together against violence and bring perpetrators to justice”. Action is needed not just pious resolutions. 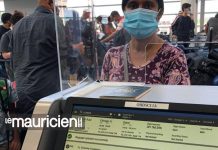