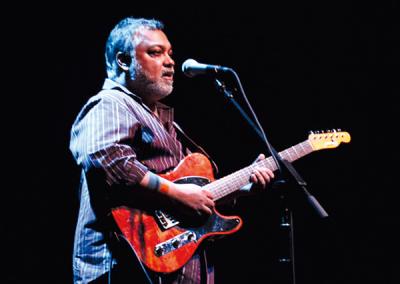 The more than 1,000 fans attending a concert in Washington of Incognito, the UK-based jazz/soul/funk band, last week had no idea that the guitarist strumming the tunes onstage had developed his love for music on the beaches of Mauritius, listening to sega songs.
Most followers of Jean-Paul « Bluey » Maunick and Incognito know them as a British band that promotes international musical talent and finds its inspiration in American jazz and British funk. As frontman, composer, record producer and guitarist, Bluey has been at it for 33 years, and his popular band has just released its 15th record, called Surreal.
Incognito is currently on a worldwide tour, with U.S. stops in Washington, Atlanta and Detroit. The 12-member band will then drag their musical equipment back to Europe with gigs in London, Paris, Germany, Latvia, Japan and Switzerland.
This was our second meeting. The first was in London about two years ago. We sat and talked over lunch on a rain-drenched day, discussing his life in Mauritius, the move to London at age 10, how he became a self-taught guitarist, the formation and longevity of Incognito and inspiration for his music and lyrics. This time he was on my turf – at the Warner Theater in Washington, DC, but Bluey was definitely in charge. During the band’s sound check a few hours before the concert, Bluey checked the clarity of each mike, the sound levels of the speakers, and barked instructions to the crew about tweaking this and tweaking that. As the band filtered out after the practice session, he sat down in one of the theater’s velvet seats and we talked about the latest developments in his music career.
« Why come to Washington? » I asked, as this city is not necessarily known as a music mecca. « This is the land of the go-go music, » he said with a smile. « It’s where this very unique style of funk music started, and without it, there would be no roots in (Incognito’s) opening number.
« This is also place of political and music messages, a place where there are lot of international people, and a lot of students, too, » he added.
Maunick said after 30-plus years, his music continues to evolve. But one constant is a connection to Mauritius, which remains strong even though he left the island at age 10 with his mother, Armande Mallet, to start a new life in England. His father, Edouard Maunick, is the distinguished African poet who won the Grand Prix de France in 2003.
« It’s become more of an international Mauritian connection these days, » he explained.  Eric Appapoulay, a British songwriter, singer and guitarist whose parents are from Mauritius, plays on a track of his new album. Bluey and Mauritian-born bass guitar player Linley Marthe played at the Guadeloupe Jazz Festival and « we created a Mauritian presence there. »
« I’m gaining an inspiration that my fellow countrymen are doing so incredibly well in playing music at the level they have been playing, » he said.
Bluey is also a frequent customer at Mauritian restaurants in London, noting that one of the restaurants made a huge gateau piment « cake » for his wife, Tamiko’s birthday last month.  « I’m connecting more to the Mauritian community, because it is so difficult to go back home often enough, » he said.
Any plans for a future concert in Mauritius? Not at the moment, Bluey said, as it’s very expensive to travel with a band of 12 musicians and a crew to Mauritius. « But, » he added with a smile, « if any Mauritian promoter reads this article and would like us to come, please get in touch. »
For more about Incognitio, visit: http://www.incognito.org.uk/about 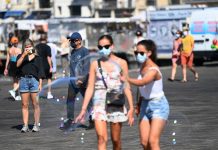 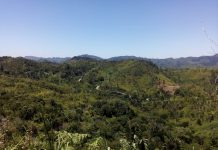 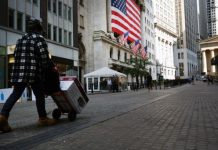