We know that our excellent First Past The Post (FPTP) system generates results that are sometimes too lopsided. But electoral reform cannot ignore fundamental facts. We’ve looked at a number of them in the first five parts of this series of articles (these have appeared in the Forum section between April 8, 2014 and December 22, 2016). We’ll consider a couple more here, revisit a few and offer some fresh insights on three electoral proposals. But first let us have a look at a useful decomposition of the FPTP system.

Breaking the FPTP in Two Parts

It helps to view our FPTP system as a sum of a PR system and a majority prize. It’s the majority prize that has provided us with a clear winner in ten out of eleven elections and that too as soon as we had finished counting the votes.

It’s again thanks to this prize that we’ve had stable government after stable government even after the departure of one or more partners. This has saved us from the trouble and the cost of going to the polls a certain number of times. As any attempt to correct some of the imbalances of the FPTP system involves making the prize smaller we need to tread carefully so that we don’t compromise the many essential benefits that it provides us.

We’re definitely blessed to have such a system. You just need to look at what happens where PR is mixed with FPTP or stands alone. You’ve surely come across the problems that voters in the Netherlands, Germany and Italy have been experiencing recently. Indeed as Table 1 shows when it comes to the formation of government our FPTP system is pretty fast on its feet.

Can you imagine what would happen if we played too much with the majority prize and ended up in a situation like the one that happened in Holland last year? By the way it’s not the first time it literally took forever to have a government there. Here we definitely cannot afford to wait for seven months to see a government emerge from a general election. We’re a SIDS that operates in a competitive world and all of our governments have played a big role in our well-being. At least those till 2006. Plus if it’s taking too long we might have to go to vote again. Of course nothing says it’s going to be better the second time. That’s not all.

Consider a situation where a clear winner on an FPTP-basis doesn’t get to form government because an opaque formula hatched by someone contained an error. You don’t have to be very smart to understand that the serene atmosphere in which our elections take place might suddenly vanish. So again, we need to be very careful with the majority prize. Let’s consider another crucial fact of our electoral history.

As Table 2 shows out of the four elections where one alliance won most if not all the seats three collapsed before two years. Only one lasted a full term and the small opposition it faced kept it on its toes. The implications for any electoral reform are significant and crystal clear: don’t be in a hurry to correct the imbalance because partners often leave government and when that happens it will alter the votes/MPs ratio and seriously threaten the stability of government. How do these two facts affect three proposals?

LP/MMM Proposal Has At Least One More Giant Flaw

As we all know this proposal is for all intents and purposes the 2012 Sithanen report which was massively rejected by voters in December 2014. We’ve highlighted many of the problems of this proposal in part 2 of this series (see Forum section June 10, 2014) including the fact that the BLS is not subsumable, that we don’t need 20 additional PR MPs to make a list of candidates reflect the diversity of our country but we do this with the first 60 and that the proposal seems to ignore that our Parliament is already too big – we’re at spot 149 out of 195 legislatures. Proportional representation is also a betrayal of what the LP stands for. No wonder Ramgoolam and many others lost power and their seats in the last general election six decades after Philippe Rozemont was expelled from the LP for voting for PR.

The additional flaw is that it doesn’t consider what we’ve illustrated in Table 2 namely that in most cases large electoral victories have not lasted. And the implications are serious. For example you will find in his report that all 20 PR seats go to the MSM after the 1995 election. Recall that the LP and the MMM had split tickets in the ratio of 35:25. Now imagine what would have happened if 20 or more MMM MPs shifted into the opposition when the alliance broke in 1997. There would have been more MPs in the opposition than Ramgoolam had in his government. I guess we would have witnessed the signing of the accord à l’israélienne a couple of years earlier. The problem here is that making too big or too early a tweak will breed chronic instability. Adding a dose of PR will also make the formation of government a lot more uncertain.

We should also note that no matter what the electoral outcome is this report recommends that after each election 20 PR MPs be added to those we send directly to Parliament. This doesn’t make any sense as electoral outcomes are not identical. It is interesting to note that in terms of the two-component breakdown of the FPTP system Sithanen doesn’t find it a problem that the majority prize becomes quite small. He will probably have to reconsider his position if his simulations were made more realistic by including the collapse of large imbalances.

There have been reports in the media that the current government apparently wants to add 12 PR MPs and an extra 7 MPs that would be picked by party leaders. This will not go down well with voters. Leaders selecting MPs is the same kind of dodgy idea as the second republic of Ramgoolam and Berenger. This is surprising as it seems that many people in the MSM and in Mauritius are against PR. In fact people have been against it for several decades.

We’ve seen what PR has done in Rodrigues: a relatively large majority has melted in more cases than one. Besides everyone has heard what SAJ said about PR when he visited Rodrigues in 2015. Finally the number of additional MPs involved in this proposal will create problems when large imbalances collapse or at the time of government formation. Incidentally, you might wish to use the FPTP decomposition to understand the thinking behind the latest formula used to allocate additional seats in the Regional Assembly in Rodrigues. More on this later.

What MOS We Do?

In part 5 of this series (see Forum section December 22, 2016) we suggested getting rid of the Best Loser System and the disproportionality of the FPTP in certain cases by recasting the large imbalances as a problem of an opposition that was too small. We then used data from the two 60-0s to fix the minimum opposition size (MOS) for Mauritius at 6 MPs after we noticed how voters didn’t seem to rank unsuccessful candidates in a haphazard way – SSR topped the list in 1982 as did SAJ in 1995. The other interesting thing about the MOS is that it will not automatically generate a fixed number of additional MPs in every election. Nope. It will do so only if there are less than six MPs in the opposition. Furthermore it is simple to understand and the odds of it frustrating the wish of voters is a lot lower than the two PR-based proposals above. This is kind of obvious as it would not have produced additional MPs in more than half of the last eleven elections.

Position of ReA is Contradictory

Most Mauritians want the BLS to go – and for the first time we have a PM who did not declare a community in a general election – but they certainly don’t want it to be replaced with PR and party lists which are likely to create political uncertainty, destabilise their governments, work against nation-building and weaken the link between them and their MPs. They definitely don’t want double candidacies as these blunt one of the most powerful options they currently have namely that of keeping politicians out of parliament – including those that have deproclaimed beaches like Pomponette. It is therefore kind of weird to see them appear in the 2014 manifesto of Rezistans ek Alternativ. 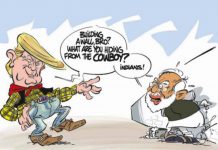