122nd Birth Anniversary of SSR – In his very own words…

Like many others of my generation, I have known Sir Seewoosagur Ramgoolam through the lens of dedicated people who have been at his side as he patiently and passionately shaped a new history for our country. A history lover, I came to appreciate the greatness of this man even more as I navigated the Legislative Council and Parliamentary Debates. There is no better way to know SSR than through his own words.

We oftentimes enumerate the achievements of SSR for our country, including universal suffrage, the Welfare State and free education, without paying much attention to the rationale behind those policies that were contentious at the time and even challenged by some as being irrational and unsustainable. But the vision of the man was clearly etched in the long-term progress of his people, across generations – “We in the Labour Party are very anxious to see that schemes of social services are established firmly in this country so that the working class may get its due and live a better life,” he said in 1961. 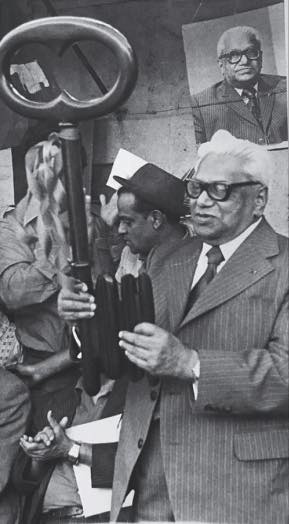 We have a complex history of triple colonization, coupled with slavery and Indian indentured labour, that have all left marked imprints on the economic, social, and cultural fabric of our society. While we are incredibly diverse, since our early years it’s been a challenge to leverage that diversity and build a nation on the foundation of inclusion. That was the daunting task SSR had, which he delivered with utmost grace. He believed that “…in a multiracial society like ours we must forge unity out of diversity. This must always be an essential part of our national policy. It is essential to our national prosperity and the happiness of our people.” And he walked his talk. He fiercely opposed the proposals of the Banwell report in 1966 that sought to discard the justified fears of ethnic minorities that they would be underrepresented in parliament. SSR raised his voice so the rights of minorities are not trampled upon which has, in turn, allowed us to thrive as a nation.

Many of us, unaware of the tribulations of our forefathers, take our right to cast a vote in the elections for granted. Less than 100 years ago, our people could not vote if they did not satisfy certain criteria – possession of property, earning a yearly salary of Rs 600, which was a huge amount at the time, and the need to have passed the sixth grade examinations. In 1948, there were proposals to extend the right to vote to women, while maintaining the property, salary and education restrictions, which SSR opposed, in a spirit of fairness for all. In his words, “we are not against female suffrage if it is extended to all women in the country without distinction of creed or class. If the workers of this country are able to send their wives and sisters to toil in the fields, I am sure they will not object to them going to the polling booths to record their votes. What we object to in the present proposal for female suffrage is that it only serves the purpose of a class of people who have always insisted on keeping things as they are.”

We are one of the rare countries with a colonial history where the diversity of languages has been jealously preserved, and this is something to be proud of. As someone who’s had the opportunity to learn Tamil, my ancestral language, at school from an early age, I am eternally grateful to SSR and Renganaden Seeneevassen for ensuring that “Indian languages such as Hindi, Urdu and Tamil are taught to our children as a matter of right.” As SSR said, “Our salvation truly lies in educating and training our men and women in such a way that they are better equipped to face the great battles of life.” He strived to “bring education to its proper

We are living in tumultuous and uncertain times. Many of our young people have been hit hard by the pandemic, and are continuously hit by yet another worse gangrene – the absence of meritocracy; the lack of recognition for their talent and competence, which is leading to the worst brain drain since independence. That aside, our citizens are not even minded to follow parliamentary debates anymore. The sanctity of the Parliament, the place from where emanates the laws that govern our lives as citizens, has been constantly violated in recent times. We have drifted far from the eloquence, decency and wisdom of debates held in our early history, which were purpose-driven. It is not surprising that most of us would probably shy from listening to parliamentary debates in the presence of our kids, and this is a dangerous curve.

We are a generation that’s experiencing an erosion of faith in politicians, institutions, and systems that have failed us on a large scale. We are also a generation that has ideals and dreams and that yearns for change. To our young people who carry hope in their hearts, I leave you with the words of SSR: “Long before the youth of Mauritius became conscious, in fact, of their role in society, the Mauritius Labour Party put its trust in them…if parliamentary democracy were to function and survive it must ever be conscious of the changing pattern of society.”