Ganesh – The Remover of Obstacles

Ganesh, also commonly known as Ganapati, is one of the most well-known deities in Hinduism. The meaning of the name ‘Ganesh’ in Sanskrit is in fact a compound: ‘Gana’ which means a group or multitude and ‘isha’ which means lord or master [1]. Also, ‘Ganas’ are Lord Shiva’s attendants on Mountain Kailash (part of The Himalayas) and ‘pati’ means lord or leader. Since Ganesh was chosen as the leader of the ganas, hence he is referred to as Ganapati. In fact, Ganesh has 108 names, which refer to his numerous characteristics [2]!

Ganesh’s father is Lord Shiva, one of the Supreme Gods of the Holy Trinity, the Destroyer of Evil and his mother is Parvati. He has a brother, Kartikeya, also known as Muruga.

There are many variations about the story pertaining to the birth of Ganesh but the most common one is as follows. Parvati was fed up of being disturbed by her husband, Shiva, while she was taking her bath. So, one day, she got the idea of creating her very own son, who would be loyal to her and guard the bathroom door. She used the grime and dirt from her own body to create a little boy, upon whom she lavished her affection. Having given him instructions not to let anyone in and handing him a staff, she went for her bath. After some time, Shiva appeared and headed straight for the bathroom. He was surprised on seeing a little boy guarding the door and wanted to go in. However, Ganesh staunchly refused and there ensued a fierce battle in which no one could defeat him. Finally, deceit was used to kill him. At some point, while Ganesh’s back was turned, Shiva used his trident to chop off his head. Soon, upon learning what had happened, Parvati flew into a rage and vowed to put an end to the universe. The only way to appease her anger was to bring her son back to life. The impact of the trident being irreversible, with Shiva unable to attach the head of the little boy to the body, he then ordered his followers to bring the head of the first creature they would come across, facing the North. They found an elephant calf and brought the head, which was placed on the boy’s body, which miraculously sprang to life.

Nonetheless, Parvati was worried that Ganesh would be mocked for his unusual appearance. Shiva invoked all gods and they blessed him with many boons. Additionally, Ganesh was given the blessing that he would be worshipped before anyone else, at the beginning of any ritual. This is why till date, Ganesh’s name is taken first, before undertaking any task, in order to remove obstacles.

Ganesh’s elephant head makes him very distinctive. He is pot-bellied, has one tusk and his mount is a mouse. He is generally depicted with four arms or more and typically holds a lotus, a conch shell, a weapon, sweets and bestows blessings with one hand. Again, there are variations about his portrayal. He is fond of sweet treats such as ‘laddoos’ and ‘modaks’ and loves music and dance. He is the god of intellect and wisdom and is the patron of the arts and sciences. He is affectionately referred to as ‘Bappa’ by his devotees. As per Hindu tradition, it is said that Ganesh wrote down the Mahabharata, which is one of the ancient epics of ancient India, while Sage Vyasa recited it uninterrupted.

Ganesh’s wit is apparent in many tales. One of these describes how he received the sacred nectar of Knowledge. It happened that Shiva and Parvati decided to hold a competition between their two sons, Ganesh and Muruga, in order to choose the one worthy to receive the nectar of Knowledge. The winner would be the first one who would circle the world thrice. Muruga immediately jumped on his peacock and started going around the world at the speed of lightning. Ganesh only had a mouse as his mount and could not possibly compete with Muruga’s peacock. Then, he got an idea. He called his parents and requested them to sit together. He folded his hands reverently and walked three times around them. Seeing his parents’ puzzled look, he explained that he was the worthy winner as they, as his life-givers, represented his whole world. Therefore, Ganesh emerged as the winner.

Ganesh Chaturthi is observed on the fourth day of the first fortnight in the month of Bhaadrapada in the Hindu calendar (usually August or September), where the frequencies from Ganesh to the earth are estimated to be highest. The festival generally lasts up till ten days. On the other hand, there is Ganesh Jayanti, the birth anniversary of Ganesh, which is held in the month of Maagha in the Hindu calendar (January/February).

Basically, Ganesh clay idols are installed in homes, temples or other communal spaces. Observances include prayers and joyous celebrations which culminate in the immersion of the idols in water.

In Maharashtra, India, Ganesh Chaturthi was initially a private, family celebration. It became a major festival under Chatrapati Shivaji Maharaj’s reign, to promote culture and nationalism, during the Mughal conquest. Afterwards, it lapsed back into a family celebration until the British Raj. Bal Gangadhar Tilak, also known as Lokmanya Tilak, was a social reformer and freedom fighter who sought to unite Brahmins and non-Brahmins in order to form a common front against the British colonialists. Ganesh, who was universally worshipped by everyone, was considered as the ideal deity of unity, in an era of ‘divide and rule’, where social and political gatherings were prohibited by the British, fearing conspiracies against them. In the 1890’s, Lokmanya Tilak organised Ganesh Chaturthi as a religious function on a grand scale in Maharashtra, to which the British were not opposed. He established the tradition for immersion on the tenth day, so that maximum communication could take place without arousing the suspicion of the colonisers.

Ganesh Chaturthi remains one of the most important festivals in Maharashtra as well as in other Indian States and is prevalent in the Indian diaspora, including Mauritius, where it has been awarded the status of a public holiday. Devotees fast for up till forty days and start preparations well in advance. On the day of the festival, they wake up early to welcome Ganesh in the midst of their homes or temples. There are prayer sessions, offerings served and jhakri (a traditional dance performed during the Ganesh Chaturthi festival) throughout the night, with men and women coming from all over the island, dancing in a circle, singing the glory of Ganesh. At the end of the festival, the idol is immersed into water (either in a river or the sea), which symbolically refers to the cosmic law of going back to the heavenly abode, leaving the material body behind, with devotees shouting enthusiastically: ‘Ganapati Bappa Morya! Pudchya varshi lavkar ya!” (My Lord Ganesh! Return quickly next year!)

Ganesh Chaturthi festival encompasses the spirit of sharing, warmth and togetherness on multi-dimensional levels, bringing people as one, in the true sense of the term. 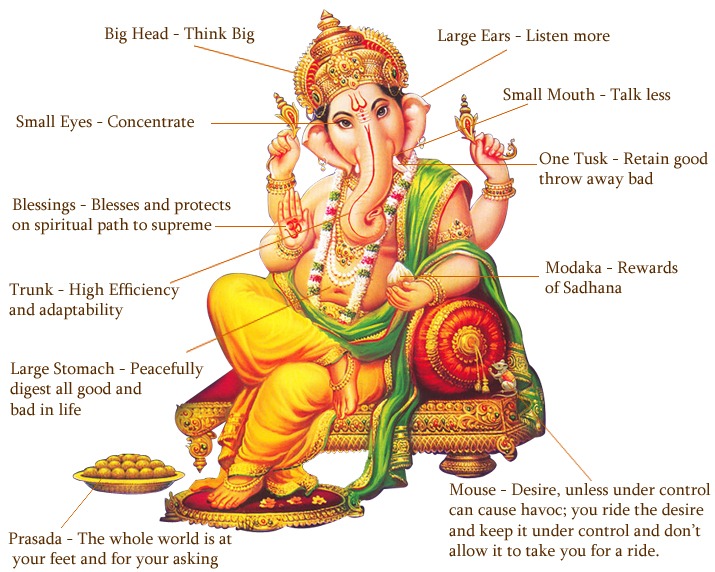