General Abdallah Amr ibn al-As (573-663 A.D.) was a Sahaba (companion) of Muhammed (pbuh), the Prophet of Islam. He was from the Quraysh tribe of Mecca – the same tribe Prophet Muhammad (pbuh) was from. He converted to Islam in the year 629/630, which was sometime before the conquest of Mecca by Prophet Muhammad (pbuh). It is also reported that his conversion to Islam occurred around the same time as that of another famous Quraysh, Khalid ibn Walid, who was a great army Commander and a devoted Companion of the Prophet of Islam. Like Khalid ibn Walid, Amr ibn al-As was also a great military General and strategist.

Initially, Amr ibn al-As was against Prophet Muhammad (pbuh) and his mission regarding Islam. He would fight the Prophet and his followers. He was at the Battle of Badr and the Battle of Uhud and was also the delegate of the pagan Meccans to the Negus of Abysinnia – now Ethiopia – to whom Prophet Muhammed (pbuh) had sent a group of his followers to seek protection from persecution and harassment by the pagan Meccans. As is well known, the Negus, who was a devout Christian and a good man, was convinced of the divine mission of Prophet Muhammad (pbuh) when his followers, as proof that Prophet Muhammed’s Message was, indeed, from divine sources, recited verses from Sura (chapter) Mariam (Mary) from the Qur’an. That was enough for the Negus. Amr ibn al-As was thwarted in his request and, on his way back to Mecca, he started to reflect more and more on Prophet Muhammad’s mission and his teachings about the One and only God (Allah). So much so when he got to Mecca, he journeyed to Medina where he met Prophet Muhammed (pbuh) and accepted Islam. He would remain from then on one of his close and ever fervent Sahabas (Companions). However, to history, he would be known for his military exploits – more particularly for his conquest of Egypt in 634 A.D.

The Prophet Muhammad (pbuh) and his immediate successors: Caliph Abu-Bakr Siddique and Caliph Umar-al-Khatab, would both entrust Amr ibn al-As with several missions that he accomplished successfully and he would emerge as one of the heroes of the nascent community of Islam. Amr ibn al-As would be a big part of the growing Islamic Ummah. In 639 A.D., Caliph Abu Bakr sent him on mission to conquer Palestine and Syria. His work done, he proceeded, on his own initiative, to Egypt, which was then a (Coptic) Christian country and part of the Byzantine Empire.

Amr ibn al-As engaged the Byzantine forces in two battles at Anjnadayn (634 A.D.) and later at Yamuk River (636 A.D.), and won decisive victories and became master of Egypt and, from then on, Egypt would not be the same.  Caliph Abu Bakr Siddique would name him Governor of Egypt and, as such, he would start the ‘arabisation’, better the ‘islamization’ of the ancient land of the Pharaohs. In 641 A.D., the Byzantines would be forced to also surrender Alexandria, then the capital of Egypt, following another defeat of the Byzantine army at Heliopolis, which is on the outskirts of present-day City of Cairo. Amr ibn al-As’s campaign in Egypt is reckoned as “one of the swiftest of the early Muslim conquests.” Egypt became a country under Muslim rule and has remained so ever since.

Amr ibn al-As was not only a successful army Commander and General but also a very able administrator and politician. He got along well with the Byzantine Coptic Patriarch. He guaranteed the security of all Egyptians in return of payment of a poll tax on all non-Muslim males in the country. He became so well ensconced in the country that soon he went on to found a new city – Al-Fustat, where he would build a Mosque – the first ever in Egypt – indeed, in the whole of Africa.

However, the Mosque would go through several redesigns and expansions. The final version was done by the Ottomans in 1875 but on the same site. The historic Mosque is named after the Arab conqueror of Egypt himself and is known as the Amr ibn al-As Mosque and remains till to-day one of the celebrated landmarks of the Old Cairo. 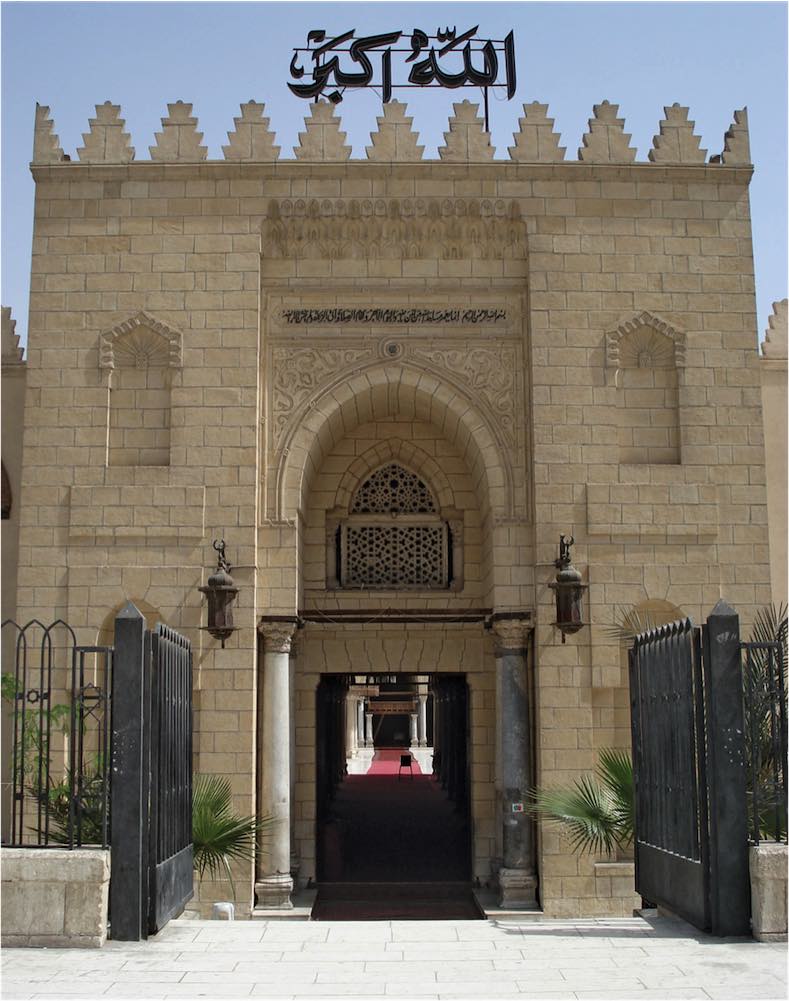 General Amr ibn al-As, who served under the Rashidun (rightly guided) Caliphs namely: Caliph Abu Bakr (632-634 A.D), Caliph Umar al-Khattab (634-644 A.D.) and Caliph Usman ibn Affan (644–656 A.D.), would be a prominent player in the rise of the Islamic Caliphate following Prophet Muhammed’s death in 632 A.D. It would spread rapidly as a religious and political force particularly in the Middle East and North Africa.

The Islamic Caliphate was created to continue the religious and administrative duties of the Umma that had until then been carried out by the Prophet Muhammed (pbuh).  Abu Bakr al-Siddique was chosen as Caliph and became the first leader of the Islamic Caliphate.

However, matters would get tense following the ‘selection’ of the third Caliph, Usman bin Affan after the death of the second Caliph Umar ibn al-Khattab.  A climate of unrest ensued as many in the ummah were not happy with the way Caliph Usman was handling matters. Ali ibn Abu-Talib, nephew and son-in-law of Prophet Muhammad (pbuh), had been passed over in the selection of the new Caliph. The choice of Usman bin Affan had made many in the Ummah unhappy. Caliph Usman, who was a Quraysh, was accused of nepotism. He promoted, in his administration, only members of the Quraysh clan – particularly in the senior administrative positions. A lot of discontent against him had started brewing in the Ummah (community), till finally, matters came to a head when a group of over-zealous Muslims, who belonged to the extremist Kharijites group mostly from Egypt, attacked Caliph Usman, set fire to his house and ended up assassinating him, which made matters worse and there arose strong resentment against Ali ibn Abu-Talib, who had been chosen as the new Caliph—a position many of his supporters felt should have long been his by virtue of his close relationship to Prophet Muhammed (pbuh) as his cousin and son-in-law.  However, Ali’s accession to the Caliphate was not smooth. He faced serious opposition from some quarters, which was settled at the Battle of Siffin in 657 A.D. when Ali triumphed and consolidated his rule as the new Caliph of Islam (656-661 A.D.).

However, during the whole conflict with Caliph Ali and his opponents, led by Mua’wiya bin Abu Sufyan, Amr ibn al-As sided with the latter, who was then the governor of Syria and whose father, Abu Sufyan, had been a long-time opponent of Prophet Muhammed and who only had converted to Islam after the fall of Mecca to the Muslims.  Muawi’yah and his group added to the volatility of the situation for Caliph Ali when they agitated and demanded that Caliph Usman’s killers be arrested and punished.

Amr ibn al-As was not happy with Caliph Usman either. In fact, Caliph Usman, sometime before his assassination, had dismissed Amr ibn al-As as Governor of Egypt. The latter, understandably, kept his distance from the Usman group and sided with Mua’wiyah. The tussle between the supporters of Caliph Ali and Mua’wiyah came to a head and the parties clashed. Caliph Ali was gaining the upper hand when Mua’wiyah suddenly sought arbitration to the conflict. Ali, in good faith, agreed.

Mua’wiyah delegated Amr ibn al-As to represent him at the talks. But matters would get totally out of hand because under the guise of ‘talks’, ‘arbitration’ and ‘entente’, a bloody betrayal and subterfuge awaited Ali’s group when they showed up for the meeting. His party was ruthlessly attacked and killed including Caliph Ali and his son Hussain.  All hell broke loose. The Islamic Ummah found itself at dangerous crossroads. Ali’s clan was eliminated and Mua’wiyah won the day and became the new Caliph of Islam and the founder of the new Umeyyad dynasty.

The bloody events that followed Caliph Ali’s death would have a profound and lasting repercussion on the future of the Islamic Ummah (community). It would split the community and, in the process, lead to a great divide, a lasting split or schism: the Shias and the Sunnis – which endures till to-day.

The followers of martyred Ali and his close ones, would opt for the Schism and would be known as the Shias as opposed to the Sunnis, who adhered to the concept of choosing the leaders by consensus of the Ummah and not through blood or hereditary relationship to Prophet Muhammed (pbuh). Thus, the Schism in the leadership of Islam, which came about as a result of political events regarding succession to the leadership, was not because of any religious disagreements. The followers of martyred Caliph Ali and his close ones, claimed that Ali ibn Abu Talib should have been the legitimate successor of Prophet Muhammed (pbuh) after his death.  However, two-thirds of the Muslims in the world to-day are Sunnis.

Amr ibn al-As, who represented Mua’wiyah all along during the conflict, played a key role on the latter’s behalf during the conflict. He managed to rid Egypt of all Ali’s loyalists and got Mua’wiyah to name him Governor of Egypt again. He would rule as such till his death in 664 A.D.  He would be interred in Cairo, in the compound of the famous Mosque that bears his name.

To-day, whenever people talk of Egypt as a ‘Muslim country’, their thoughts go back to Amr ibn al-As, the Conqueror, who made it all happen.